Description
Initially, the military prospects of France were not good when she entered the Thirty Years War. Her troops were undisciplined and lacked experience so she needed alliances. She was threatened primarily by Spain who tried to maintain the Spanish Road from Italy to the Netherlands. To minimize the threat, in July 1635, France signed a treaty with Savoy, Parma and Mantua for a joint campaign in north Italy. The French Huguenot general, Rohan, was sent to help the Swiss Protestants in a campaign to overthrow the Valtelline. In October 1635, the German, Bernard of Saxe-Weimar, and his army were taken into French service.
While Rohan and his army had success in north Italy, Bernard of Saxe-Weimar successfully besieged Breisach after defeating the Holy Roman Empire’s army at Rheinfelden. The siege of Breisach was a success and allowed the French to cut the Spanish Road. Alsace also fell to Bernard. After his death in July 1639, his army came under the direct control of the French and the following year saw the emergence of two very capable French military commanders: Turenne and Louis II, Prince of Conde.
These commanders engaged the Imperialists and despite defeating the Spanish at the Battle of Rocroi in May 1643, were unable to mount a serious campaign in Europe as military exhaustion broke out throughout Europe.
Common to the period, there was no set French uniform. Most of the troops tended to wear un-dyed wool or coats dyed red or blue. Pants were ribboned at the knee and could reach mid calf with buttons running down the outside seams. By the 1640's the pants tended to end at the knee. French headgear was generally a grey or black brimmed felt hat. The boukinkan, (a hat similar to the montero) was also used. Officers wore capes or tabards (cassocks), as did the musketeers. It was common for French officers to wear white sashes. The baldric was worn on the right shoulder and the bandoleer, if any, on the left. Unusually, the French drummer wore their drum on the right side with the head almost vertical. Most drummers of the period wore the drum on the left, but the head of the drum was vertical.
Under Henry IV the French abandoned the deep, block-like infantry formations of the Civil Wars and adopted the ten-deep formation of the Dutch. The principal cause of the change was the reports of French Protestant noblemen who had served in the Dutch War under Maurice of Nassau. During the reign of Louis XIII the depth of infantry formations was reduced yet further, and eight ranks seem to have been the norm.
The French, like their Spanish, Imperial, and Catholic League counterparts, did not train their troops in the linear sense with regular drills, formations and regulations. Instead they relied on the individual veteran to impact the necessary skills to recruits on an individual basis. While this worked well for the deep tercio formations, the shift to new linear formations saw much better performance by the veteran units versus the newly formed regiments which had few or no “old soldiers” 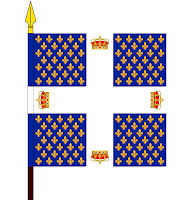 ﻿
Commanders of the French Guards during the Thirty Years' War were:
The regiment was created by Charles IX on August 1 1563. The Gardes Françaises had precedence over the Gardes Suisses and over all line infantry regiments. The guards brigade had many privileges. Often, the Gardes Françaises occupied the centre of the first line and the Gardes Suisses the centre of the second line. During sieges, it opened the trenches, was at the head of all assaults and was the first brigade to enter into a conquered city.
The command of this regiment has often been assumed by a Maréchal de France. Its Lieutenant-Colonel had the rank of a Lieutenant-General and its Major was also Major-General of the French infantry. By a regulation of March 27 1691, the captains of the regiment had the rank of Colonel, its Lieutenant the one of Lieutenant-Colonel, its Sous-lieutenants and Ensigns the rank of Captain.
During the Thirty Years War, the unit joined the army of La Sarre under Maréchal de La Valette in 1635. These troops joined the Swedes of Bernard of Saxe-Weimar in Mentz of that year. The unit reinforced the army of Champagne under Louis de Bourbon, Comte de Soissons in 1636 taking part in the storming of of Hedsin. Later in 1643, the unit was at the siege of Thionville.
At Lens, 1648, the unit crushed three enemy battalions, one Spanish and two German. Drunk with their success, they were surrounded by Spanish tercios. Rushing to their defence, the remaining French troops broke the tercios.
In general the unit strength was two-thirds musketeers and one-third pike. By 1635, the assigned enlisted strength of the regiment was increased to 9,000 men.

Unit History – Picardie IR (1558-1780)
The regiment is the first of the infantry regiment after the French Guards and the Swiss Guards. It was created 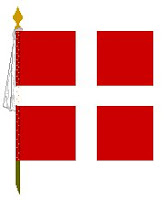 in 1558 by Henry II. It is the first of the "Old Bands " within the French army.
The unit joined the army of La Sarre under Maréchal de La Valette in 1635. These troops joined the Swedes of Bernard of Saxe-Weimar in Mentz of that year. The regiment was nearly exterminated, along with the Navarre IR, at the battle of Thionville.
Later in 1643, the unit was at the siege of Thionville. Transferring to the army of Duc d’Enghien later that year, the regiment was at Rocroi. There the unit massacred a 1,000 Spanish musketeers in a dawn ambush but was rallied with difficulty at the engagement.
In Lens, 1648, the unit rushed to aid the Garde Francaises who has crushed three enemy battalions, one Spanish and two German. Drunk with their success, the Garde was surrounded by Spanish tercios. Rushing to their defence, the remaining French, including the Picardie IR, broke the tercios.
The unit fought in the battle of the Dunes (1658) against the Spanish alongside the Cromwellian forces.

Unit History - Piédmont IR (1558-1780)
Since 1494, there were units designated as bandes d'au delà des monts (bands from beyond the mountains) at the service of the King of France. They were charged with the conquest and permanent occupation of Piémont and other countries beyond the Alps. 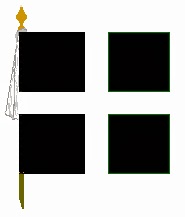 In 1552, when Henri intervened against the Emperor, 20 black ensigns of the Bandes de Piémont were with his army.
In 1558, these Bandes noires de Piédmont were organized into a regular regiment by King Henri II. It’s ranking in the rolls with Navarre and Champagne remained confused until Louis XIV issued an ordinance in 1666 to rule on the order of precedence. The regiment was among the six French regiments known as Vieux Corps.
In the Thirty Years War, the unit was assigned to the Italian campaign in July 1640.
The unit, along with the Orleans Gendarmes, fought at La Marfee (1641) against a Spanish force sent to support the uprising of the Comte de Soissons. The French, under Chatillon, launched a head-on attack against higher ground but were beaten off and driven from the field. However, the revolt collapsed as the Comte de Soissons was killed in the fighting.
In 1643, the regiment was at Rocroi. The unit was in the center under the command of D’Espenan along with the Picardie IR.
The unit fought in the battle of the Dunes (1658) against the Spanish alongside the Cromwellian forces. 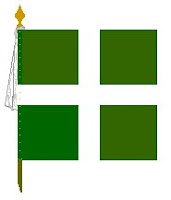 an ordinance in 1666 to rule on the order of precedence. In the Thirty Years War joining the army of Champagne in 1635, it took part in the storming of of Hedsin in 1639. In April 1646, the unit was decimated at the siege of Llerida. 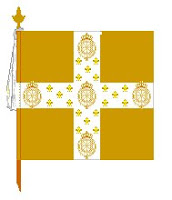 Tilladet. With the death of Antoine de Bourbon, King of Navarre in November 1562, the regiment was assigned to guard of his son Henri of Navarre who became Henri IV, King of France in 1589. At this point, the regiment entered the service of France. The regiment was among the six French regiments known as Vieux Corps.
In 1635, the unit joined the army of La Sarre under Maréchal de La Valette. The French troops joined the Swedes of Bernard of Saxe-Weimar in Mentz later that year.
The regiment was nearly exterminated, along with the Picardie IR, at the battle of Thionville (1639). The French commander, the Marquis de Feuquieres, was killed in the engagement which lifted the French siege of Thionville.
Later in 1643, the unit was at the battle of Tüttlingen as part of Gassion corps.
From 1652 to 1658, the regiment was stationed in Italy as a garrison force located in Pavia, Valenza and Alessandria.

The regiment was raised in Normandy under Louis XIII in 1615 by Concini, Marshal d' Anchors and tasked to 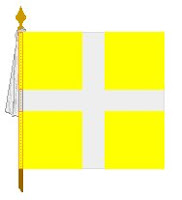 protect Marie de Médicis. With the regiments creation it retained its seniority from the old bands of Normandy which constituted its core. After the death of Concini and the disgrace of his son, then colonel of the regiment; command was given to the brother of the Constable de Luynes taking the name of the province of Normandy.
The unit joined the army of La Sarre under Maréchal de La Valette in 1635. These troops joined the Swedes of Bernard of Saxe-Weimar in Mentz of that year.
In 1649 the regiment was sent to Italy for a year. From 1656 to 1658, the regiment was stationed in Italy as a garrison force located in Valenza, Alessandria and Mortara. 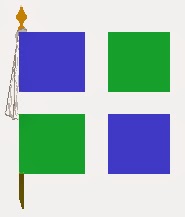 The original sixth unit of the Vieux Corps was called the Rambures regiment. Originally raised in 1621 during the blockade of La Rochelle, it became a regular French regiment in September 1635 when Cardinal-Duc de Richelieu persuaded the King to integrate it into his regular units. Originally Companies regular de la Mer and initially known as "Cardinal Richelieu", it took the 16th rank. Renamed in 1652 to La Marine, and under the influence of Cardinal Mazarin, who was meste-de-camp of the regiment (1648 to 1652), the regiment changed its rank from 16th to 6th.